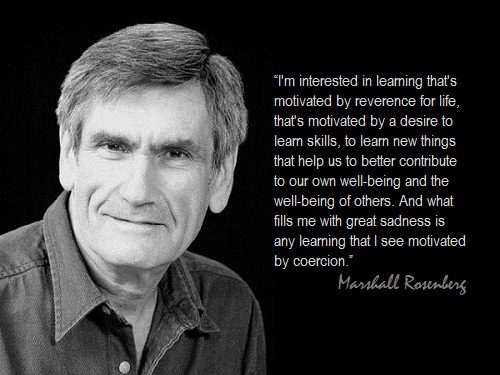 Dr. Marshall B. Rosenberg, age 80, passed away peacefully and surrounded by family, at his home in Albuquerque on February 7th, 2015, after a courageous battle with cancer.

Born in Canton, Ohio on October 6th, 1934, Marshall was raised in Detroit and completed his undergraduate education at the University of Michigan. He received his PhD in Clinical Psychology from the University of Wisconsin in 1961, where he met his friend and mentor, psychologist Carl Rogers. He was awarded Diplomate status from the American Board of Examiners in Professional Psychology in 1966. Marshall launched his professional career in St. Louis where he established a successful clinical practice.

Marshall’s desire to put people over profits, as well as his curiosity and desire to learn more about the causes of violence that had defined his early experiences living in inner city Detroit, soon inspired him to leave private practice. He took a job as a cab driver and used this time to explore new and meaningful ways he might apply his professional training to reduce various forms of violence and disseminate peacemaking skills. Marshall’s exploration quickly evolved into Nonviolent Communication (NVC), a process that facilitates stronger interpersonal communication and cultivates mutual recognition of deeper emotional needs, resulting in greater compassion and peaceful resolution between conflicted parties.

Marshall worked closely with civil rights activists in the 1960’s, mediating between rioting students and college administrators and working to peacefully desegregate public schools in long-segregated regions. Marshall’s work in this capacity motivated him to found of the Center for Nonviolent Communication (CNVC) for which he served as the Director of Educational Services.

A dedicated teacher, peace-maker and visionary leader, Marshall led NVC workshops and international intensive trainings for thousands of people in over 60 countries across the world. Marshall was passionate about his work and traveled to war-torn areas and economically disadvantaged countries, offering NVC training to promote reconciliation and peaceful resolution of differences. He worked tirelessly with such groups as educators, managers, mental health and health care providers, lawyers, military officers, prisoners, police and prison officials, clergy, government officials, and individual families. Marshall authored several books and received numerous awards throughout his career.

Marshall is survived by his beloved wife, Valentina Rosenberg, his family, colleagues and students from around the world. In our great mourning, and with deep reverence and soaring gratitude for the spirit he released in us, we hope to carry our beloved Marshall’s light forward. We find comfort in his profound sense of humor and grace, which continues to soothe our hearts with much laughter and love. We will miss you Dear One!

“Only from the Heart can you touch the Sky” – Rumi